This is a POTENT FULL MOON, and if you're in any way into 'intention work', this is one of the most potent times of the year to sit down, collect your thoughts and dream a bigger future for yourself. So check into the energy of it at 17.45 (UTC) on the 24th October 2018

I wrote about this Full Moon, back in August in my blog piece 'Releasing the retrogrades' and as I re-read it, the magnitude of it really sinks in, so thought I'd reshare it. I really have moved on and away from that which I'm not. So I've copied and pasted below the excerpt and added in a few extra notes to include an asteroid translation too. Enjoy!

This is a shocking Full Moon bringing about big changes and new beginnings. It takes place on the 24th October 2018 at 17.45, with the Sun opposite Moon at 1 degrees Scorpio/Taurus. The Moon is conjunct Uranus and the Sun, Moon and Uranus are square the North Node. It is now only Neptune, Uranus and Chiron who are retrograde still.

This is a day to shake off the shackles fully and dream bigger dreams, plan for greater resources, more aligned adventures and a deeper reconnection to your karma. Whatever it is you've been working through, during this Summer/Autumn of retrogrades, this date promises the need for a BIG new start. From the tensions of recalibrating who you are (brought about from the retrogrades 2018), you are now in such a clearer position to make strong new choices for yourself, without the karma of the past holding you back. It is like cutting away from the past and being given the chance to forge ahead on your own.

Hold the intention that you are free.   That you are free to be whoever you now want to be, given what you have learnt about yourself. You have re-valued your life and resources and can now let go of that which is not you in favour of who you really are.

The Sun, Moon and Uranus are in an exact grand square with the following celestial bodies at the time of the Full Moon. They are as follows:- 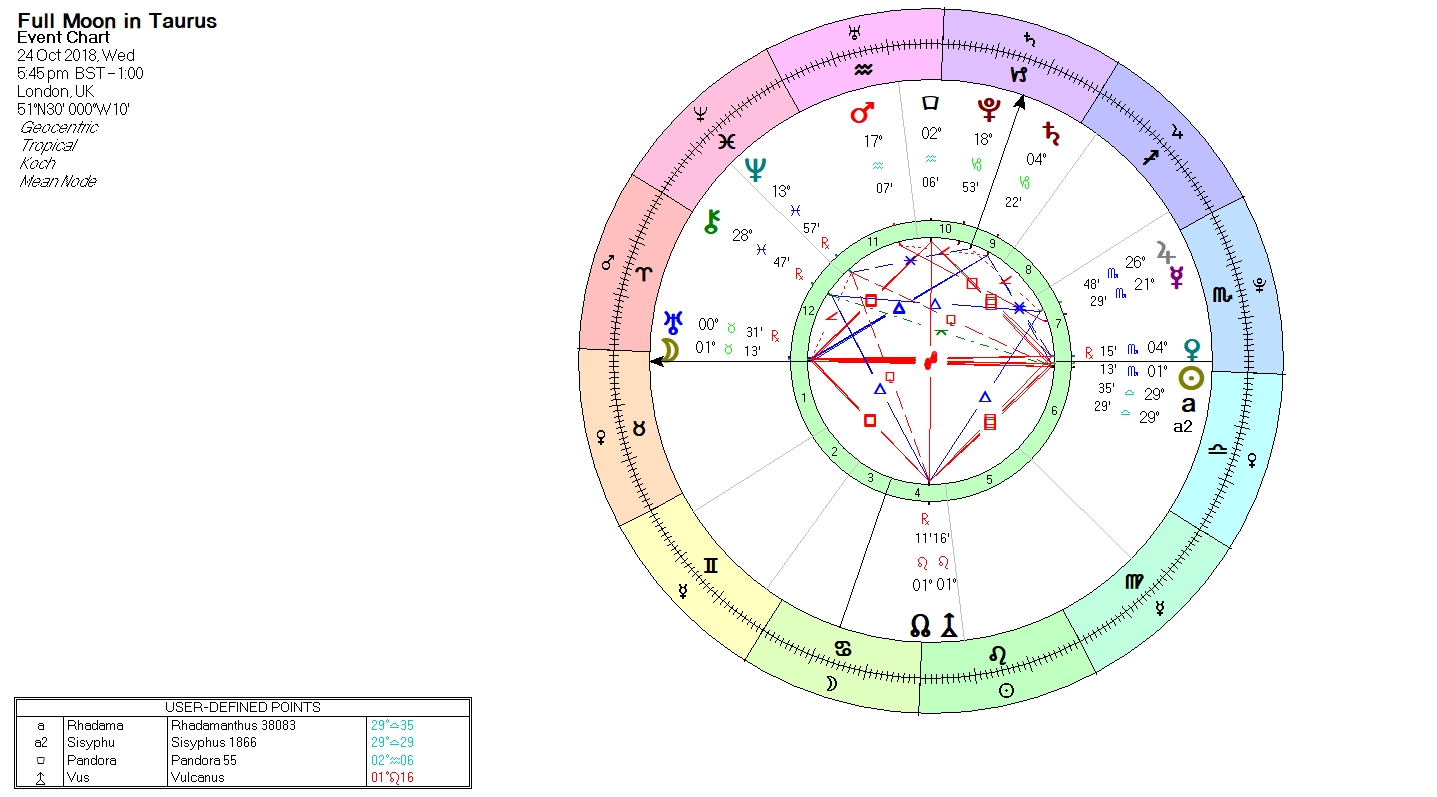 How this fits together

The freedom you are seeking, has come from the direct conflict created through the ego's beliefs in punishment, judgement and inflexibilty as a way of creating order (Rhadamanthus) AND through a refusal to accept defeat, a dogged determination to continue the same endless thought patterns again and again (Sisyphus).

This challenge has come about through information shared that might have better been left unsaid, but now it has been shared in the world, it needs to be processed in a place of hope, rather than pretend it had never happened. (square Pandora)

There is lots of energy to transform the Karma of the situation, and your Karmic direction, simply by forgiving, letting go of and easing out of your judgements of other's wrong doing, or acceptance of your victimhood. The release of your judgements will shock you into a new stage of being, a new freedom, a new awakening energy.

Whatever situation you have found yourself in has arisen from a place of inflexibility, coldness, authority, justice and punishment, but you don't have to stay there. Let others think what they will, there is a stubborness to save face and for many a refusal to face facts. The time of harsh judgements, punishments, frozen empathy and head over heart is fast disappearing.

With special thanks to www.alexasteroidastrology.com and Alex Miller for having shared ideas about the energies 3 of these asteroids.

If you've found this useful and would like to know more about your personal birthchart, cosmic coding and where it's all leading you, why not consider booking a private, bespoke consultation?

Previous articleEquinox to Full Moon - Getting to the Root Cause

Next article Jupiter in Sagittarius - Rights of Passage to Magnificent Unfolding!