Jupiter's orbit around the Sun takes 11.86 years to complete. It therefore changes astrological sign approximately every 12 months, sometimes more and sometimes less. This November (2018), Jupiter moves into Sagittarius and will reside there for just under 13 months. So what does this transit mean to us? If you can remember back 12 years to what was happening last time, you'll have a head start. But if you can't remember, let's explore some of the themes about to surprise and delight you..., here's a quick summary of what is covered in this blog piece. So you can zero in on the heading that's most important to you:-

When we come across Jupiter in Astrology, Jupiter represents hope, expansion, luck, optimism, generosity and abundance. It describes how situations in our lives might grow, and yield results. It shows our own approach to expansion in all it's forms. For instance Jupiter can represent when our waistlines are due to expand, as well as our investments!

Jupiter also represents humour and slapstick. It's where we get the word Jovial from. As such it can also represent where we are careless and a bit too optimistic. 'A bit too' is a good description of how Jupiter can influence us, because we might underestimate our abilities during an important Jupiter transit, and trip ourselves up.  Jupiter is a 'bon viveur' and doesn't know when to stop (that's Saturn's strong point).

Pride comes before a fall and Jupiter's regal energy certainly can inflate our sense of self, when it is strongly aspected in our charts. And when it comes into stressful contacts with our natal planets, it can also become a bit of a tyrant.

For example, when Jupiter aspects squares or oppositions to Saturn, Pluto or Uranus, Jupiter's influence can be more dictatorial rather than generous, as Jupiter enhances and augments what's already there for you. It can certainly bring out our less desireable habits.

Sagittarius is the 9th sign of the zodiac and is traditionally linked to the higher mind and what resides outside of our local sphere of experience.  As a fire sign, Sagittarius encourages us to burn brightly, with warmth, cheer and a sense of expansiveness.

Sagittarius is ruled by Jupiter, so when we talk of the higher mind, and Jupiter's influence, you've got an expansion, an enlivening. The Sagittarius/9th house energy, brings us curiosity, a thirst to turn information into real knowledge and experience. A newness and an opportunity that sits outside our usual cultural experience.

Many people with a strong Sagittarius/Jupiter/9th house element in their birthcharts, think of themselves as world citizens, moving from country to country, meeting people from different religions and spiritual groups. They frequently involve themselves in social movements and have stressed out bookshelves and cupboards full of 'learning' notes and books crammed into nooks and crannies.

Of course modern day Saggies, are more likely to have subscriptions to mulitiple podcast feeds and host regular TED Talk days...or times when friends come over to talk, share and debate. Saggitarians like the sound of their own voice and opinions...and I should know! (with 4 planets, the north node in Sag and with a strongly aspected Jupiter - this energy is not lost on me).

So as Jupiter moves into Sagittarius after it's recent 13 months in Scorpio, this marks quite a useful time for people who naturally resonate with the Sagittarian energy. Or for people who have an angle, or important planet in Sagittarius, this marks the start of a dose of hope, growth and a fresh perspective.

"it's like we've been acting out the last few scenes of the movie of our life, and we know the sequel is about to start and that we're starring in it. As yet unkown to us, the script is being manifested by the power of our intention. Jupiter conjunct the Moon is a good portend for dreaming the best possible outcomes and loving it into reality"

Jupiter's recent transit through Scorpio, expanded our awareness into all those subjects that Scorpio is famous for. And the 'gloves were off' - what was unleashed was the desire or need to probe very deeply to the core of our belief systems about all aspects of life, death and all that lies in between.

This aspect allowed us to explore all the repressed sides of our personality thoroughly enough so that we learnt something to help us evolve into much more resilient and compassionate people, and as many of you know, a strong immune system needs some dirt to really practise itself. Jupiter in Scorpio was not a 'sterile' transit.

Clients who talked to me during this transit spoke of these themes. They also came up for review in my own life:-

There was also a real movement of people from one stage of life to another, ie people getting conscious to the fact that their lives were changing and that it would never be the same again.

As Jupiter first moves into Sagittarius on the 8th November, they'll be a giant clearing up of residual Scorpio energy. There might be relationships to be rebuilt, or strengthened. We might find that we're dealing with the aftermath of emotional shock, passing away of situations and people we once held dear, and readjusting to how we use money within our family collective.

When the Scorpio energy has subsided,  we'll go into the real work of the Jupiter in Sagittarius energy - coming to understand the 'new truth' of what we're about, our new beliefs systems based on hard won recent experience. We'll be encouraged to speak up and out.

And thats the thing that has struck me with the chart for Jupiter's move into Sagittarius on the 8th November. It's about drawing a close to what we're brave enough to move on and away from. It represents closure and a new start from a vastly expanded emotional perspective.

It's a time when celebrating our RITES OF PASSAGE might be helpful, so we can allow one part of our life to die, as we embrace the beautiful power of growth and generous expansion.

And so I see this sentiment as the next chapter for us to enact, as we familiarise ourselves with Jupiter in Sagittarius and the opportunities for our continued, magnificent unfolding! And to make the most of what Jupiter can offer us.....

Jupiter in Sagittarius - The current planetary line up 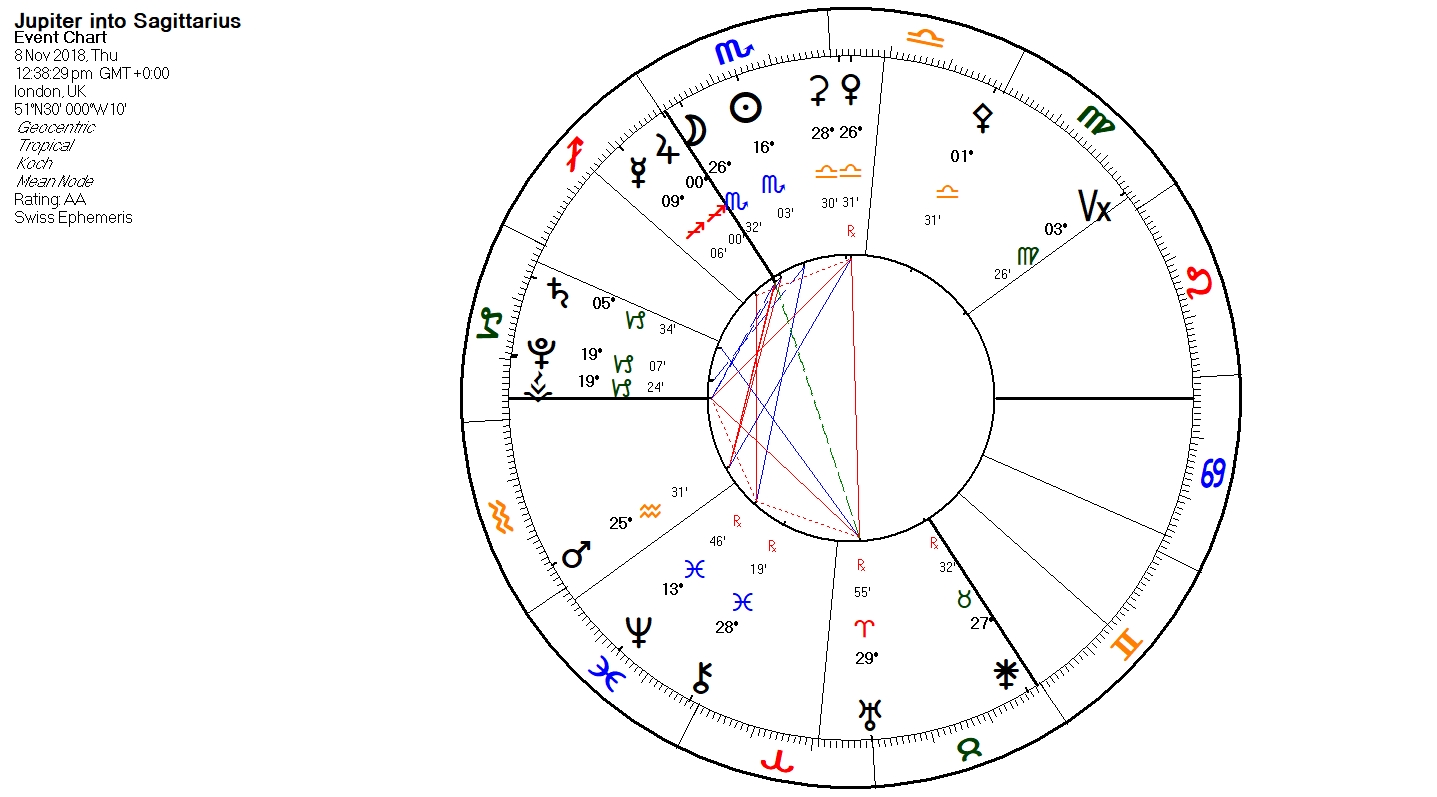 When Jupiter moves into Sagittarius on the 8th November 2018 at 12.38 GMT, a clear theme emerges. A theme of impending completion. But not before we experience the curtain call of Scorpio, as those dark themes take a bow.

The New Moon in Scorpio on the 7th November is the curtain call. Giving us the opportunity to get clear about what we have learnt, and allow the Moon's natural motion to carry this learning right through with Jupiter. The Moon will be conjunct Jupiter as he finally moves into Sagittarius on the 8th.

At the moment. Jupiter moves into Sagittarius, he is:-

It would seem all of these aspects occur in the last 5 degrees of each sign, like there's a completion of karma going on right now. Like we're in the last few scenes of a great movie.

I remember reading a few years ago that people with a high level of planets in the last few degrees of sun signs, had a strong karma completion cycle going on in this lifetime. I've since had the pleasure to observe that people with aspects in their high twenties do indeed seem to be pattern breakers and completers of mortal toil in some way. They appear to be 'old souls'.

Here, at the moment of Jupiter's ingress (movement) into Sagittarius, we have expansion beyond the old patterns that we are leaving behind. It is representing the 'summing up and moving on' of our behaviours.

The meaning of these times in a nutshell

To sum up these patterns in a nutshell I would say,

We are entering a creative new time with fresh perspectives (Uranus) and a focus on the 'feeling of coming home' (North Node). This is following the shock and unrest ( Uranus again) of dealing with unresolved, unhealed childhood patterns (Chiron). During this time we learnt about self care and nurture (Ceres) and how unconditional love ought not to 'hurt' or cause pain (Juno/Venus). It has been turbulent and confrontational (Mars)

As we leave this period behind, we have done as much work as our tired, dear souls could manage. But the key learning for us, was that 'if it hurts, it's not love' and that we now have an intelligent and emotional framework for understanding when we have been compromised, manipulated or our trust abused.

We now have the narrative and vocabulary to understand this and to articulate this. We now also can recognise that looking after ourselves, might mean to dissociate ourselves from unreflective elements and energies that want to stay in the darkness of abuse/tyranny and control.

Jupiter's first new aspect he makes on arrival into Sagittarius is a sextile with Pallas Athena. This I feel is a beneficial reminder for us to expand on the highly prized new realisations we have won. To embed our new behavioural patterns and to recognise and celebrate the truth of our emotional freedom.

"Jupiter in Sagittarius is opening doors up to new realities, enough to bring us closer to who we really are. We'll be free to get on with the real work of expansion, and that is to 'understand our purpose' and to be ok with it all."

So to top it off, I'd say, allow this 'truth' energy to penetrate to the core of who you are. Allow yourself to feel vulnerable with all the things you can't control. And be open to the inevitable expansion of your emotional dreams. Don't let false pride keep you in a stasis pattern (that's Jupiter in Scorpio and old energy).  As my husband often says 'This sh*t just got real!' be your truth and stick around to clear up your mess!

So are you excited yet? Are you a bit scared? Are you wondering how this transit might affect you in your charts? To get a better idea of how to interpret Jupiter in your own chart, why not consider investing in a bespoke, private consultation? My newly revised package is here.

Details of the 90 Minute Consultation

Previous articleOctober Full Moon - Moving on, Moving away (24/10/18)Next article North Node in Cancer - 'There's no place like home'